The Contribution releases Which Way World on March 30th, 2010 (SCI Fidelity Records); the album will be available digitally everywhere and on CD (the disc includes bonus video footage shot during the recording process) at www.thecontribution.net.

Be sure to check out the Contribution Media Player, featuring streaming audio & video from Which Way World, plus links to purchase the album!  Also, to celebrate the release, we will be streaming Which Way World in its entirety starting Monday, March 29th! You’ll be able to enjoy the whole album all week long, exclusively on the Contribution Media Player. 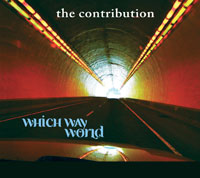 Which Way World on iTunes

Which Way World on LiveDownloads.com

The limited edition CD/DVD – only 100 copies – is available at http://thecontribution.net/goods, and at the CD release parties.