Hey Hey, so I am closing out this run at Boulder Theater tonight, and I wanted to dig in a bit and reflect on some of my early SCI memories from this great venue.

I think it was here, where I first played music with String Cheese. I remember seeing them at the Fox earlier that year and being impressed. In fact, I was blown away by the “kid” on acoustic guitar. Not only by his playing, but also by the tone of his instrument. I had never heard an acoustic guitar sound so present and “real.” So later that year, when my band Durt was asked to open for them at the Boulder Theater, we all loved the idea.

I had been jamming with Kang and other local musicians (including Dave Watts) for a while, so we were familiar with each other’s playing. Durt was mainly a rock outfit and I was probably only carrying my Roland D-50 keyboard at that time. The sounds in this board were, to say the least, very ‘80s. So when the SCI boys asked me to sit in that night, I was super pumped, but a bit hesitant as to how my sounds would fit their vibe. I have no idea what I played. Probably “Bigger Isn’t Better “ and “Jellyfish.” Those were the first ones I learned.  And I’m not sure how it came across, but I must have passed the audition because they asked me to hop on tour for a few more shows. 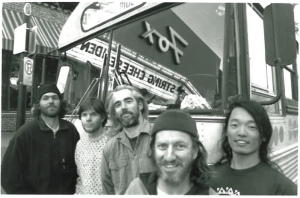 Since then, we have played almost every venue in the area from the Fox to Fillmore, but the Boulder Theater is one of the classic venues. And haunted or not, we always had a fun time playing here. This town has a great history of supporting live music and it seems to be a vortex for musical creativity. So many bands have gone on from here to become nationally known. There must be something in the water. And as for String Cheese, it was always nice to come back to Boulder after a long tour. It’s nice to come home.

Boulder has been my home now since 1993 and I have loved every year. It seems this area has been a hot bed for great music over the decades. String cheese is just one of the many bands that has been born from the creative forces in this area.